By Scala MarketingNovember 20, 2018 No Comments

As part of an ambitious Exhibition Road entrance redesign, the Victoria and Albert Museum (V&A) turned to Intevi / Scala to make its vision of a large-scale digital ticketing desk and video wall a reality. The result is stylish, unique, and most of all provides visitors with an exquisitely streamlined experience as they enter the space.

Upon entering the V&A via the new Exhibition Road entrance, which also includes a courtyard and temporary exhibition gallery, visitors’ attention is drawn to the large video wall (32ft x 2ft) is made up of eight consecutive 55 inch screens. The screens, supported by a custom made wall-mounted housing and mounted behind protective glass with interactive touch lm applied, oat at an angle of 45 degrees, which makes them easily accessible for all visitors.

The eight screens, each equipped with a chip and pin reader and a printer, can run separately as vending screens or in unison as a larger video wall, which can run video content or promotional material across the length of the installation.
“The large video wall attracts the eye of the customers like a call to action as they enter this gigantic space,” said Tom Scott, managing director of Scala platinum partner Intevi. “Then from each individual screen, customers can purchase tickets for specific exhibitions or events.”

“Intevi have once again proven to be a leading partner in both execution craftsmanship, guidance to the customer and vison when it comes to creating a very impactful yet useful dynamic digital signage solution.”
– Harry Horn, GM EMEA & VP Marketing Global of Scala 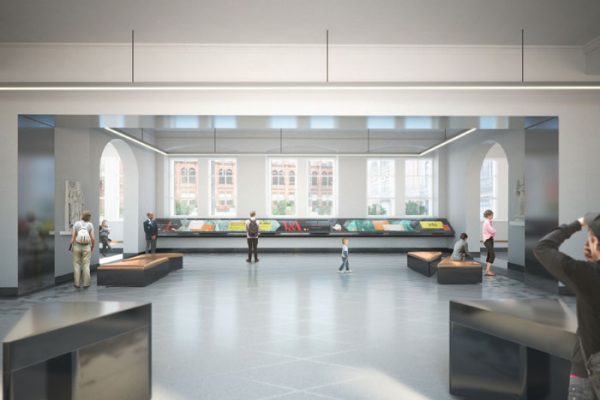 Each display at the V&A supports independent touch, where each foil operates separately to the one next to it. Each alternate touch foil runs on a different frequency, to prevent interference between customers inputting financial data during their ticket purchases.

“The initial web pages for the ticketing solution are transparent, to allow traditional Scala content to play on each screen until a customer interacts with the display. Once a customer interacts with the display the web based ticketing solution come to the fore,” explained Scott. “Scala supported the roll out of this refined independent touch foil solution perfectly.”

This was the first time the V&A had implemented Scala’s digital signage solution. Scott said,“Scala was the only software that allowed us to run eight individual media players driving each ticket station independently, or to run a single player with eight outputs to turn the installation into a single display fabric.”

The key to the success of the digital ticketing combination of nine licenses of the Scala media player in a software-as-a-service (SaaS) model, Scala Content Manager and Scala Designer. In addition, Scala is also driving six general digital signage screens across the museum. The V&A team creates and uploads its own content in-house.

“Scala’s content management system, combined with the ability to provide both interaction and touch, made Scala the obvious and perfect choice of digital signage vendor for this project.”
– Tom Scott, managing directer Intevi

As part of an ambitious Exhibition Road entrance redesign, the Victoria and Albert Museum (V&A) turned to Intevi / Scala to make its vision of a large-scale digital ticketing desk and video wall a reality. The video wall, enabled by Scala, is made up of eight 55” screens and supports independent touch. Visitors can learn more about specific exhibitions or events and purchase tickets on screen.